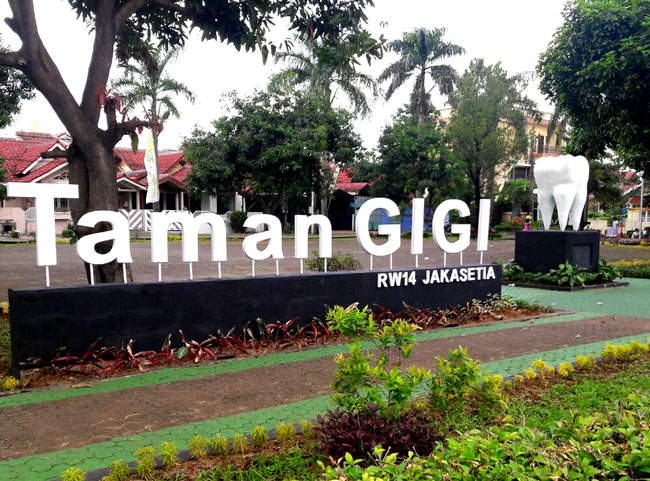 A vacation doesn’t have to be expensive and tiring. It is because people can simply visit a nearby park and conduct a meaningful family recreation there. For those living in Bekasi City, they have many options including Gigi Park! The location is in Telaga Asih Village and it belongs to West Cikarang Sub-District. To be exact, the park resides in Taman Aster Housing area. For the information, it was built to realize the local government’s program regarding the construction of 1000 parks in Bekasi. So, what makes it unique or different than others?

The Nuance
In terms of name, “Gigi” means tooth. As the name suggests, tourists may find unique statues having the shape of a tooth. No one knows the reason, though. It is likely the local government only wanted to provide a distinct park to accommodate nearby people. Still, the nuance is similar to other parks. It looks both clean and serene, which is suitable for relaxation. Plus, several sophisticated facilities are available for tourists to use including the wireless fidelity connection, benches, and much more. The site is also surrounded by trees and several plants! Not to mention a big name sign resides there.

Exploring Gigi Park
The most common thing to do in Gigi Park is relaxation. It is because nearby residents take advantage of the park to relieve stresses and to relax after work. No wonder, the site becomes a little bit crowded in the afternoon. During weekends and holidays, though, the park also gets crowded even in the early morning. That time is the perfect occasion for families to enjoy recreation with their family members. Not only it is free, but it is also near from their home.

As mentioned before, Gigi Park features unique statues and ornaments having the shape of a tooth. Even they can find other unique ornaments like a toothbrush! These objects often become a background for photography, in fact. Many people also take selfies in front of these ornaments! The next allure in the park is none other than the facilities. For the information, the site features nice benches and reliable wireless fidelity connection. Visitors can use these freely, for sure.

The next common thing to do in Gigi Park is definitely sports. It is as simple as jogging and playing soccer in the available field. One thing, many people would use the field during holidays so it is better to come at the other day. As for the tip, tourists should ask those people and join the soccer game politely. It is fun to play with strangers, after all. Don’t you think so?

How to Get There
From Bandung City, a trip to Gigi Park takes approximately 1 hour and 57 minutes. It is because the distance is 103 km. Here is the tip. Make sure to take Cipularang Highway and Raya Pantura Street for a faster trip. After arriving at West Cikarang Sub-District, the last thing to do is to reach Telaga Asih Village where the park resides.