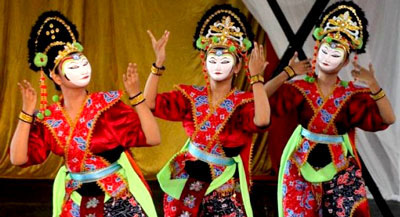 Each region indeed has signature culture or traditions, which also become another allure in terms of tourism. No wonder, for those coming to Bekasi City, they may find several interesting local performances including the Topeng Dance or Tari Topeng. Even though it shares the same name with that of Cirebon, this one offers a distinct beauty for everyone to enjoy. The good thing is the locals have been working hard to retain the tradition and tries the best to promote it to outsiders especially tourists. So, what makes it different than Cirebon’s?

The Nuance
In terms of equipment, the dancers indeed wear a mask as its prime accessory. After all, “Topeng” means a mask. When it comes to attire, they wear colorful and stunning attire. So, what about the performance? Unlike Cirebon’s Topeng Dance (which only focuses on the dance moves), this one also includes other elements like acting, literary arts, vocal art, and music art. No wonder, it looks like a theatrical show instead of a mere dance! The fact is the performance also includes traditional jokes during the event!

Exploring Topeng Dance
For those who never watch Bekasi Topeng Dance, they must consider hiring a local guide. After all, the performance consists of several phases which might a little bit daunting for the audience. In the beginning, there is the gong beating. It shows that the event has just begun. The unique thing is the number of beating varies depending on the number of Neptu. For instance, there are 4 beatings if it is done on Monday. Have no worries. The local guide may tell the reason and further explanation about it later.

The second phase is called Tatalu, which marked by the sound of Rebab. As for the third phase, it depends on the purpose of the performance. For instance, it involves a solemnization of a marriage if it done during the family occasion. Yet, it features only a greeting if it is done as a mere entertainment. The next phase is considered the prime aspect, which is the dance. It involves three different characters or masks called Rahwana, Satria, and Subadra. Once again, tourists can get more information about it from the local guide.

At the end of the performance, there is a humor or comedy done by the local comedians. It is indeed so entertaining and helps the audience to get rid of stresses due to busy daily routines. As for tourists, the whole performance becomes a distinct entertainment that they can enjoy while visiting Bekasi City for sure.

How to Get There
In order to enjoy the performance, tourists can watch it directly in Bekasi City. If they come from Bandung City, the trip may take around 2 hours and 25 minutes. It is because the distance is 133 km. Have no worries. This trip becomes faster if they take Purbaleunyi Highway and Pantura Street.